From Wikipedia, the free encyclopedia
Jump to: navigation, search
For the stream in Montana, see Baking Powder Creek. 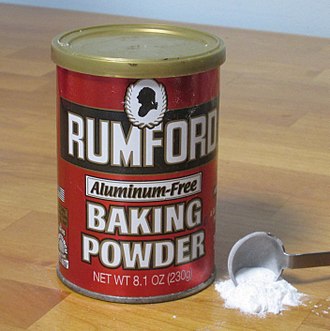 Baking powder is a dry chemical leavening agent, a mixture of a carbonate or bicarbonate and a weak acid and is used for increasing the volume and lightening the texture of baked goods. Baking powder works by releasing carbon dioxide gas into a batter or dough through an acid-base reaction, causing bubbles in the wet mixture to expand and thus leavening the mixture.

Baking powder is used instead of yeast for end-products where fermentation flavors would be undesirable[1] or where the batter lacks the elastic structure to hold gas bubbles for more than a few minutes,[2] or to speed the production. Because carbon dioxide is released at a faster rate through the acid-base reaction than through fermentation, breads made by chemical leavening are called quick breads.

Most commercially available baking powders are made up of sodium bicarbonate (also known as baking soda or bicarbonate of soda) and one or more acid salts. Typical formulations (by weight) call for 30% sodium bicarbonate, 5-12% monocalcium phosphate, and 21-26% sodium aluminum sulfate. The last two ingredients are acidic: they combine with the sodium bicarbonate and water to produce the gaseous carbon dioxide. The use of two acidic components is the basis of the term "double acting." Another typical acid in such formulations is cream of tartar, a derivative of tartaric acid. Baking powders also include components to help with the consistency and stability of the mixture.[3]

Baking soda (NaHCO3) is the source of the carbon dioxide,[4] and the acid-base reaction can be generically represented as shown:[5]

The real reactions are more complicated because the acids are complicated. For example, starting with baking soda and monocalcium phosphate the reaction produces carbon dioxide by the following stoichiometry:[3]

Baking powders also include components to improve their consistency and stability. The most important additive is cornstarch,[3] although potato starch may also be used. The inert starch serves several functions in baking powder. Primarily it is used to absorb moisture, and thus prolong shelf life by keeping the powder's additional alkaline and acidic components dry so as not to react with each other prematurely. A dry powder also flows and mixes more easily. Finally, the added bulk allows for more accurate measurements.[6]

The acid in a baking powder can be either fast-acting or slow-acting.[7] A fast-acting acid reacts in a wet mixture with baking soda at room temperature, and a slow-acting acid will not react until heated in an oven. Baking powders that contain both fast- and slow-acting acids are double-acting; those that contain only one acid are single-acting. By providing a second rise in the oven, double-acting baking powders increase the reliability of baked goods by rendering the time elapsed between mixing and baking less critical, and this is the type most widely available to consumers today. Double-acting baking powders work in two phases; once when cold, and once when hot.[8] Common low-temperature acid salts include cream of tartar and monocalcium phosphate (also called calcium acid phosphate). High-temperature acid salts include sodium aluminium sulfate, sodium aluminum phosphate, and sodium acid pyrophosphate.[9] Despite very low acute toxicity, exposure to aluminum salts has raised concerns regarding potential neurotoxicity.

For example, Rumford Baking Powder is a double acting consumer product that contains only monocalcium phosphate as a leavening acid. With this acid, about two-thirds of the available gas is released within about two minutes of mixing at room temperature. It then becomes dormant because an intermediate form of dicalcium phosphate is generated during the initial mixing. Further release of gas requires the batter to be heated above 140 °F (60 °C).[10]

Early chemical leavening was accomplished by activating baking soda in the presence of liquid(s) and an acid such as sour milk, vinegar, lemon juice, or cream of tartar.[11] These acidulants all react with baking soda quickly, meaning that retention of gas bubbles was dependent on batter viscosity and that it was critical for the batter to be baked before the gas escaped. The development of baking powder created a system where the gas-producing reactions could be delayed until needed.[12]

While various baking powders were sold in the first half of the 19th century, the modern variants in use today were discovered by Alfred Bird in 1843. August Oetker, a German pharmacist, made baking powder very popular when he began selling his mixture to housewives. The recipe he created in 1891 is still sold as Backin in Germany. Oetker started the mass production of baking powder in 1898 and patented his technique in 1903.

In the US, Joseph and Cornelius Hoagland developed a baking powder with the help of an employee following the American Civil War. Their formula became known as Royal Baking Powder. The small company eventually moved from Fort Wayne, Indiana to New York in the 1890s and became the largest manufacturer of baking powder in the US.[citation needed]

Eben Norton Horsford, a student of Justus von Liebig, who began his studies on baking powder in 1856, eventually developed a variety he named in honor of Count Rumford. By the mid-1860s "Horsford's Yeast Powder" was on the market as an already-mixed leavening agent, distinct from separate packages of calcium acid phosphate and sodium bicarbonate. His product was packaged in bottles, but Horsford was interested in using metal cans for packing; this meant the mixture had to be more moisture resistant. This was accomplished by the addition of corn starch, and in 1869 Rumford began the manufacture of what can truly be considered baking powder. In 2006 Rumford Baking Powder was designated a National Historic Chemical Landmark in recognition of its significance for making baking easier, quicker, and more reliable.[13]

During World War II, Byron H. Smith, an inventor in Bangor, Maine (U.S.), created a substitute product for American housewives, who were unable to obtain cream of tartar or baking powder due to war food shortages. Under the name "Bakewell", Smith marketed a mixture of sodium pyrophosphate mixed with corn starch to replace the acid cream of tartar component of baking powder. When mixed with baking soda, the product behaved like a single-acting baking powder, the only difference being that the acid is sodium acid pyrophosphate. A similar product is marketed today, under the name Bakewell Cream.

How much to use[edit]

Generally one teaspoon (5 grams (0.18 oz)) of baking powder is used to raise a mixture of one cup (125 g) of flour, one cup of liquid, and one egg. However, if the mixture is acidic, baking powder's additional acids will remain unconsumed in the chemical reaction and often lend an unpleasant taste to food. High acidity can be caused by ingredients like buttermilk, lemon juice, yogurt, citrus or honey. When excessive acid is present, some of the baking powder should be replaced with baking soda. For example, one cup of flour, one egg, and one cup of buttermilk requires only ½ teaspoon of baking powder—the remaining leavening is caused by buttermilk acids reacting with ¼ teaspoon of baking soda.[citation needed]

Moisture and heat can cause baking powder to lose its effectiveness over time, and commercial varieties have a somewhat arbitrary expiration date printed on the container. Regardless of the expiration date, the effectiveness can be tested by placing a teaspoon of the powder into a small container of hot water. If it bubbles energetically, it is still active and usable.[14]

Different brands of baking powder can perform quite differently in the oven. In one test, six U.S. brands were used to bake white cake, cream biscuits, and chocolate cookies. Depending on the brand, the thickness of the cakes varied by up to 20 percent (from 0.89 inches to 1.24 inches). It was also found that the lower-rising products made what were judged to be better chocolate cookies.[15]