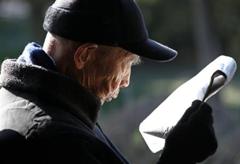 An elderly man reads newspapers on a street in Beijing December 22, 2010. REUTERS/Petar Kujundzic

SHANGHAI/BEIJING (Reuters) - Retired professor Chen Chongyu and his wife Liu Zhenjuan dreamed of coming back to China from their daughter's home in France, but until last year the couple had nowhere to go.

That changed when they found Cherish-Yearn, an upscale retirement community on the fringes of Shanghai and a pioneer in catering to China's prosperous elderly.

"Every year we would come back to China, and we would visit retirement homes. But we couldn't find anything," said 79-year-old Chen, a history professor who specialized in the French revolution.

"When we finally found this place we felt we could return."

China's traditional model of children living with their elderly parents is under siege, thanks to 30 years of the one-child policy and rapid urban migration.

Leaving their daughter's home in France, Liu, 74, and Chong paid 690,000 yuan (US$104,545) to move into a three-room apartment on Cherish-Yearn's beautifully sculpted campus.

And their spending power is rising. Chinese senior citizens command about 300 billion to 400 billion yuan in annual disposable income, according to Kunal Sinha, chief knowledge officer at marketing firm Ogilvy & Mather in Shanghai.

That will rise to 5 trillion yuan over the next three decades.

"The whole marketing world is obsessed with young people. The reality for China, the demographic change, is that in 15 years' time, the number of young people is going to halve, it's going to be 50 percent of what it is today," Sinha told Reuters.

"The number of senior people is only going to double."

HYPERMARKETS AT THE FOREFRONT

Hypermarkets in China's megacities have caught on to the fact that senior citizens are the main grocery shoppers in the family, sending morning buses and offering discounts to lure them in.

But apart from health supplement makers, few other industries in China are working to earn their silver dollars.

Still, in recent years there's been a sudden pick up in investment in senior homes and so-called "silver towns."

Yoko Marikawa, a Japanese consultant specializing in the seniors' industry, says nearly 50 of her Chinese clients have launched or are planning to launch retirement communities across China with total investments expected to be between 15-25 billion yuan.

French catering and hotel firm Sodexo (Paris:EXHO.PA - News) is in talks with the Chinese government for similar services, an executive said.

But most foreign firms and funds are still waiting for the government to issue standards on facilities and services.

"Investors still don't know which standards are good. If they invest in the facility now and later the government announces some other standard, they're all out. They would have to rebuild or change some facilities," Marikawa said.

Cherish-Yearn chairman Xi Zhiyong is ready to take on that risk as he bets on the future of the industry. He invested 600 million yuan in Cherish-Yearn, which opened in 2008.

His new business even helped him deal with personal problems.

"I started this because I personally felt the need. One year my mother was hospitalized 11 times. Each time I was on a business trip and would receive a call from her and would have to come back," he said. Now, his parents, his in-laws, and his brother and sister's in-laws all live in the new compound.

"The main risk is that we are still a little early. The parents of the first children of the one child policy will reach 70 in about five years," says Xi, adding that the international average age for people in retirement homes is 71.5 years.

A steady inflow of cash from these homes for the elderly is a much more attractive business model than straight out property development deals, especially as new restrictions make land and funding harder to find, said Xi, who started out in traditional real estate.

"In many of the older Vanke developments, about 30 percent of the residents are elders living alone -- empty nesters. So we're looking into different ways of meeting their needs," said chairman Wang Shi, who himself is 59 and an active mountaineer.

Vanke's new retirement developments will be rental properties, marking a new business model for the company.

Retirement communities are still a rarity in China, and upscale ones even more so. Less than 2 percent of China's elderly live in nursing homes, according to Ninie Wang, a government advisor on aging and founder of Pinetree Services, which provides services to elders at their homes.

China can't muster the comprehensive financial support offered in Europe or North America, so it favors options that allow the elderly to stay in their own homes .

"The government is now developing a whole system to provide support services that enable people to stay in their communities and in their own homes," Wang said.

Xi expects these companies to follow him on his expansion into four new complexes across China.

"I studied Walmart. It's basically a big platform for manufacturers to sell their goods," Xi said.

"I am a big platform for service providers to sell their service. That means I can expand quickly and offer a high level of service."