don't mess up with creation

My hunch is don't mess up with creation. Diversity is about survival - some variation (low, high) means to survive; others mean to extinguish. You can't predict what's good for long-term. Research is like driving at night: you can't see beyond your headlight.

Somehow, you can't do much about it as it's GENOMONEY! Another gold rush in - genomoney - money talk - money, money, MONEY! So much promise (see the attached PDF and below, for your amusement.
Hello! See the point?

Why Gene-Editing Technology Has Scientists Excited

A new technology for “editing” defective genes has raised hopes for a future generation of medicines treating intractable diseases like cancer, cystic fibrosis and sickle-cell anemia.

Such drugs could home in on a specific gene causing a disease, then snip it out and, if necessary, replace it with a healthy segment of DNA.

Drugs of this type wouldn’t hit the mass market for years, if ever; pharmaceutical firms are only now exploring how to make drugs using the gene-editing technology, called Crispr-Cas9. But the approach offers tremendous potential for developing new treatments for diseases caused by a mutated gene.

“What if you could go right to the root cause of that disease and repair the broken gene? That’s what people are excited about,” says Katrine Bosley, chief executive of privately held Editas Medicine. Its projects include developing a gene-editing drug treating one type of Leber congenital amaurosis, a rare disease that causes blindness in children.

Crispr-Cas9 isn’t the only technology capable of editing genes, but researchers consider it easier to use than other methods, says Dana Carroll, a professor of biochemistry at the University of Utah School of Medicine, who helped pioneer another gene-editing approach called zinc finger nucleases.

Among other efforts under way using Crispr-Cas9 technology, privately held Intellia Therapeutics Inc., in partnership with Novartis AGNVS-0.78%, is probing how to create a gene-editing drug that could harness the immune system to fight certain blood cancers. The two companies are also exploring the treatment of hereditary blood disorders like sickle-cell anemia and beta thalassemia. 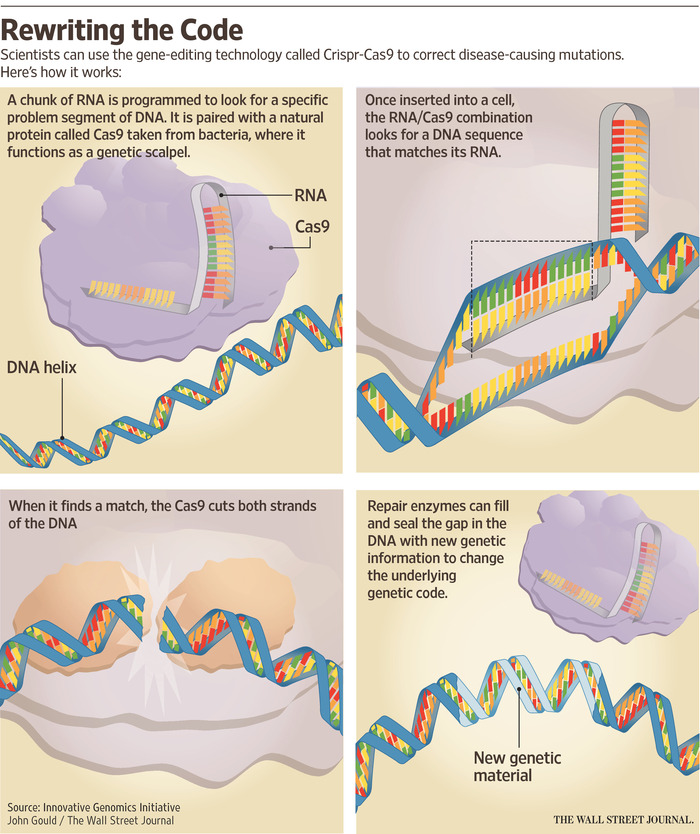 Intellia CEO Nessan Bermingham says drugs based on Crispr-Cas9 promise to complement the pills and biotech drugs currently available, targeting diseases that aren’t well treated by existing therapies. “This is a new tool to target and treat disease,” he says.

Industry and academic laboratories are also using the technology for more immediate effect: to genetically engineer mice and other animals so that they have humanlike diseases that researchers can then readily study.

Using Crispr-Cas9 to make the animal models is “much quicker, easier than the other methods that have been available,” says Tim Harris, senior vice president of precision medicine at Biogen Inc.BIIB-5.51% The company is using the technology to study amyotrophic lateral sclerosis, or Lou Gehrig’s disease, which has lacked good animal models.

Crispr-Cas9 attracted notoriety in April, when Chinese scientists reported trying to repair the genes that cause beta thalassemia in 86 human embryos obtained from a fertilization clinic. The work raised fears that gene editing could be used to tweak babies in many ways before they were born.

Drug companies say such ethical fears don’t apply to their research using Crispr-Cas9, which they are conducting in nonreproductive cells, not embryos.

Also hanging over the research is a patent fight. 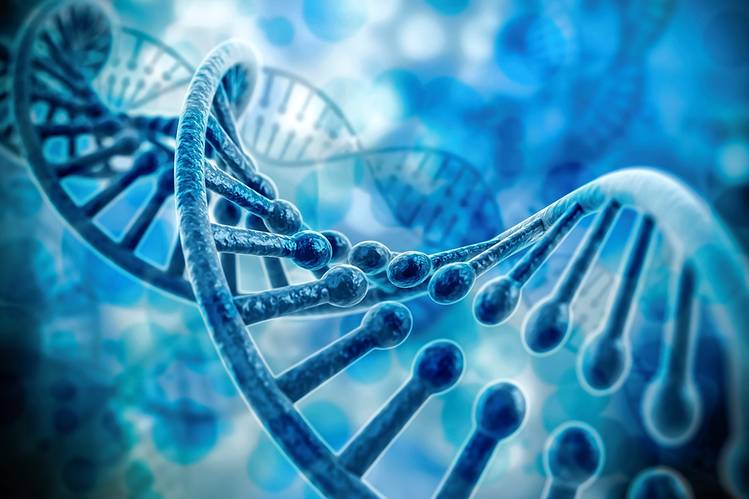 The scientists have created competing companies. Dr. Doudna co-founded Intellia. She also founded Editas with Feng Zhang of the Broad Institute and other university scientists, but Dr. Doudna no longer has a role at the company. Dr. Charpentier helped establish privately held Crispr Therapeutics.

The technology has two basic components. One part is the Cas9 protein, which snips out a defective gene. This molecular scissors is steered to its genetic target by the second component, a single molecule of RNA.

For example, a cystic-fibrosis drug based on the technology would consist of a guide RNA molecule programmed to find the mutated gene responsible for that disease. Then the Cas9 protein would cut both strands of DNA around that gene. The drug would also include a piece of DNA with a healthy genetic sequence, which cells could copy as they go about repairing the break in their chromosomes. For some diseases, the defective gene won’t need to be replaced with healthy DNA.

But such a treatment remains years away. The research by Dr. Doudna and Dr. Charpentier highlighting the therapeutic potential of Crispr-Cas9 was published just three years ago, and the first experimental treatments based on it haven’t even been tested yet in humans.

Among the unresolved technical challenges is figuring out the best way to deliver the drug to the cells it is targeting. The RNA gets the drug to the right gene, but it doesn’t guide the drug to the right cells. Researchers are exploring hitching a ride on a harmless virus called the adeno-associated virus, or on tiny lipid nanoparticles. Both potential carriers have been under study for delivery of other kinds of drugs. “We still need to identify the best delivery methods,” says Rodger Novak, CEO of Crispr Therapeutics.

Because of the delivery issue, the first gene-editing therapies will probably involve removing a patient’s blood or other cells, treating them with the Crispr-Cas9 therapy in a laboratory and then returning the treated cells to the patient, says Dr. Charpentier. She says it will also be easier to verify outside the patient that the gene editing is working as intended.

And the first drugs based on Crispr-Cas9 will probably target diseases that can be treated by simply knocking out a defective gene, because it isn’t yet feasible to easily replace it with a new segment of DNA, according to Editas’s Ms. Bosley.

“In 10, 15 years, our relationship with genetic disease will be very different from today,” says Jacob Corn, managing director of the Innovative Genomics Initiative—a joint effort of UC Berkeley and the University of California, San Francisco—which is collaborating with drug maker AstraZenecaAZN-2.68% on using Crispr-Cas9 to gain a better understanding of diseases. “It will be, ‘Oh, my child was born with sickle cell. We’re just going to change that.’ ”

Mr. Rockoff is a Wall Street Journal reporter in New York. He can be reached at jonathan.rockoff@wsj.com.