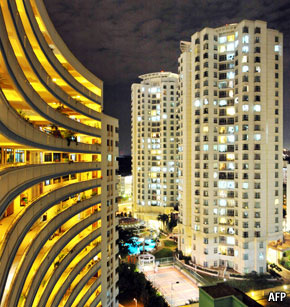 THERE was a time when the names of posh condominiums in Singapore were just pompous (“The Legacy”) or cheesy (“Rhapsody on Mt Elizabeth”). At least they were in a recognised language. Developers seem to have decided that only neologisms can do justice to their latest creations. Arise “Foresque Residences” (every day will be “filled with never-ending wonderment”); “Illuminaire on Devonshire”; “The Foresta@Mount Faber”; “The Trizon”; and “The Waterina” (with a “sanctuary-like water court”). No longer mere buildings, these are “new residential typologies”.

Prices have been rising in all segments of the market, not just in the swish condos. Historically low interest rates mean extraordinarily cheap mortgages: some buyers can get teaser rates of below 1%. Mohamed Ismail, the boss of PropNex, the biggest estate agent in Singapore by market share, points out that prices for ordinary public housing units (called HDBs, from Housing and Development Board) are also at an all-time peak, with their resale prices 66% higher than just four years ago.

The boom has also been pushed along by rich foreign buyers. About 16% of private units are now bought by outsiders. Singapore has always been a popular place for wealthy Indonesians and Malaysians to park their money, but the big difference now is the influx of Indians and, more importantly, Chinese. According to CLSA, a broker, only 7% of foreign buyers were Chinese in 2007: that figure has leapt to 19%. Anecdotal evidence suggests that some of these speculators have been coming to Singapore after authorities acted to curb their opportunities in China. “It confers class status in China to say that you own a flat in Singapore,” says Mr Ismail. Hong Kong is not as desirably offshore as it used to be. Singapore is also closer to fair value, according to The Economist’s long-run average ratio of house prices to rents.

The government has been trying to dampen things down by targeting speculative transactions. The latest measures, introduced at the start of the year, made it more expensive to sell a property within the first year of purchase and raised the deposits payable by second-home owners from 30% of the property’s value to 40%. They seem to be having an effect. Private house prices rose by just 1.9% in the second quarter, the smallest gain for two years, and the volume of units sold showed a 25% dip in June on the previous month.

The government has also embarked on a big HDB building programme. About 25,000 units are under construction, with most due to come onto the market in two years’ time. That should bring prices down a bit. The Singapore dollar remains very strong, deterring some foreign buyers. At some point interest rates should rise, too.

Even so, the recent trend has been for each short period of correction to be followed by a resumption in price rises. One sign of a sustained slowdown would be a return to less frothy condo names. Anyone for Prudence@RafflesPlace?