Is S$8 million for condo showflat worth it? 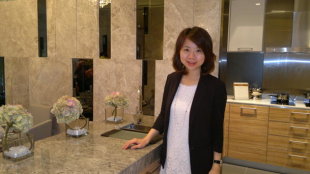 Take a peek at the S$8 million showflat. (PropertyGuru)

High prices for private homes in Singapore are nothing new. But with an S$8 million showflat and an average unit price of S$1,330 psf, we felt compelled to ask the developer of Thomson Grand: Why?

Located in the Upper Thomson area, Thomson Grand is Hong Kong property developer, Cheung Kong Holdings Pte Ltd's (CKH) latest Singapore project and since its launch, the response has been overwhelming. PropertyGuru reporter Cheryl Tay sat down with Cannas Ho, sales manager of CKH, and got her to spill the beans on Thomson Grand's unique features, buyer profile and more.

Q. There's been a lot of talk about Thomson Grand's S$8 million show flat. Why spend so much and what's the feedback been like from the public?

A. When we first saw this piece of land, we felt that it was very unique. It has open views of Singapore Island Country Club (SICC) and a lot of greenery. From the beginning, we'd planned to build a luxurious residence here. In order to achieve that, we needed to present it such that it matched the positioning of the product, so we have spent money to build a very grand sales office and showflat. The main purpose is to let potential buyers better understand and visualise what end product they are going to have. We want them to experience living here, even before the building is completed. I think it was worth every cent.

Q.The average price of a unit at Thomson Grand is S$1,330 psf, a high price for a mass market project in Singapore. What's the reason behind this?

Q. Thomson Grand's launch may have sold out but the initial weekend's 20 percent take-up rate of units was lower than the average 30 to 35 percent for other recent similar projects. What was the reason for this?

A. When we launched 50 units on the first day of the preview, they were taken up quickly. We then released another 20 units and they were snapped up as well. Of the units released, the take-up rate was 100 percent! Since we are not a big developer in Singapore, we did not plan for all the units to sell out at once. Also, the TOP date for this project is 2015. We are not in a hurry to sell all the units; we just want to meet (the demands of) the market. Then we will release it in batches — our target is to launch 100 units this year. Right now, more than 70 units have been sold and I think we will meet the target. We are very happy with the response so far.

Q. Sales of strata-titled units have been brisk. It's been reported that over half have been sold and the remainder put on reserve. What's the appeal behind them?

A. I think the homes themselves are very appealing. Traditionally, the Thomson area is known for having a lot of landed properties. However, the difference in this (development) is we have a clubhouse and very good security. So the facilities are much better than (those of) landed houses. 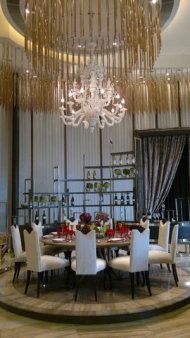 Q. What's the buyer profile of Thomson Grand? How many are locals and foreigners? Where are the foreign investors coming from?

A. The profile is quite interesting — over 70 percent of the buyers are locals (from) nearby (estates). We have talked to both agents and buyers; they like the product and feel that it is very difficult to find a similar project on the market, even in prime districts such as the CBD. About 30 percent of buyers are from overseas, including Malaysia, Indonesia, Thailand, UK and mainland China. In fact, nearly half of the foreign buyers are from China.

Q. Before the launch of Thomson Grand, there had been no new condominium launches in the Upper Thomson area. Was there any worry that this might affect sales?

A. No, in fact this actually helped sales! Because there had been no new projects in the area for many years, there was high demand. Residents in this area are looking for new developments and I think the lack of such offerings attracted buyers to Thomson Grand.

Q. Private residential sales volumes in Singapore have been slowing down recently. What do you attribute this trend to?

A. In the past six months, sales have slowed down a bit. However, we believe the economic fundamentals are very good, as interest rates are low and that in the second half of the year, sales will pick up because of this. Over the past few months, property seekers have been more cautious because of global economic uncertainty. As such, they have had to view more showflats and take more time to make their decision. But they have purchasing power and they will surely invest. I think in the next few months, sales will pick up again and the overall volume could be similar to last year.

Q. Cheung Kong only has a handful of property developments in Singapore. Any plans for more residential or commercial projects here?

A. We are always looking for opportunities here (in Singapore). We study the land supply in the area and target residential, grade A office and other types of commercial property. Our goal is to build a landmark project in the area. We are not a big developer in Singapore, so when we plan any land acquisition, we always look for the best and most unique location, such as Upper Thomson, which boasts grand views. We always look for good land with good prospects for luxurious landmarks, just like what we have done with Marina Bay Residences, Marina Bay Financial Centre and The Vision in West Coast. Every time we have a new concept, we build luxurious property and set a new benchmark in that area.