S’pore property crash: When and how serious? 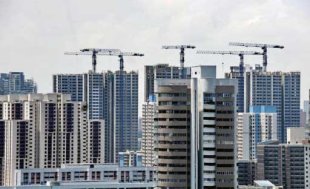 This property-crazed city of five million seems hell-bent on disproving the old theory that what goes up must come down.

Despite warnings of a possible crash, land-squeezed Singaporeans and rich foreigners are still buying private (as well as resale public) homes at red hot prices.

Shrugging away a number of cooling measures, the property bull — which became active in 2005 — has continued to charge, albeit at a slower pace.

A recent prime condo traded at a new record high of S$5,842 psf. Prices had shot up another 17.6 percent in 2010, setting off alarm bells of a bubble building.

It is giving Minister for National Development Khaw Boon Wan nightmares. Last month he warned that the market could head for a possible collapse because of vastly increased supply.

Most analysts agree that a blow-up is coming but disagree on the intensity and timing. One said it could happen as early as 2013.

However, there doesn't seem to be any real fear. Singaporeans and foreigners, who made up 29 percent of buyers last year, are still opening their cheque books to developers.

"People have short memories. Tell them prices will fall, they will laugh. Remember the property crash of 1998? It only fully recovered after 12 years," reminded Clinton Lee.

"History would repeat itself. It happened in the 1990s and would happen again," said a blogger.

The fundamentals — low money costs and high immigration — however, continue to convince many Singaporeans and foreigners that property still makes good investment. For simplicity, this article excludes public properties.

There are two reasons for this traditional craze. Firstly, land in Singapore is scarce and finite.

Secondly, it is considered a good investment because, while supply is limited, demand will grow as long as there is economic growth and stability.

Some 20 years ago, the population was three million; it is now five million, up 40 percent. Not surprisingly, property values more than followed.

In most other countries, people generally buy a home for long-term residency, and they sell only if they get a job in a distant place.

But a large majority of Singaporeans who can afford it often sell their home for another "to take profit" — or to upgrade or downgrade.

This is not new, but has in recent years been joined by a plethora of foreigners, including mainland Chinese, Indonesians, Malaysians and Indians.

A survey some years back found that 53 percent of Singaporeans had moved homes at least once in the previous 10 years. Reasons: upgrading, downgrading or speculation.

Owners plan to 'flip' homes or rent them out

The value of private homes gave investors a real return of 8.6 percent a year between 2005 and 2010.

The attitudes and lifestyles mean that residential homes are seldom permanent for the new generation. If they are not sold off, they are rented out to foreigners.

The spiralling market has created a traditional speculative fervour among many owners. Most do not hesitate to sell their homes for a profit and buy another on downturns.

Tens of thousands of ordinary Singaporeans — from secretaries to doctors — hope to "flip" homes the way they do shares.

Like stocks, they sometimes lose, and lose big, as when the balloon burst in 1996. Values dropped by 38 percent, wiping out billions of dollars in citizens' assets.

The phenomenon had occurred elsewhere in developed cities like Tokyo, Hong Kong, Paris and Brussels, some of which had crashed even more dramatically.

There are also many short-term bankrupts who borrowed and bought high before a downturn.

One analyst observed that people who bought private properties in 1996 were actually getting a negative real return of 0.6 percent as of the end of last year.

Rising beyond the reach of ordinary folk

The rocketing prices have moved private property ownership out of reach of most fresh graduates setting out in life. If they are lucky, they may get a government flat.

In some cases, they are an obstacle to young couples getting married or raising children.

Data shows that from 1990 to 2008, private home prices tripled, while household incomes only doubled.

This implied that private homes were significantly less affordable now than 20 years ago, since the rise in home prices had outstripped income growth by 50%.

At the moment, investors are smiling. Property websites have had more than their fair share of optimism recently.

Some home-seekers are staying by the sideline, preferring to wait.

Scenario of a property crash

There could be tens of thousands of empty condos looking for foreign tenants, and the consequences would reverberate throughout the economy, especially in stocks, banks, cars, jobs and higher bankruptcies.

Many passive homeowners may pay a price, too. Boom or bust, it will not have a lasting effect on people's lives — which will recover, but for some, only after years.

They will always evolve around property, public or privately-built.

One factor will not change, however: Private homes will be harder for the young generation to own.