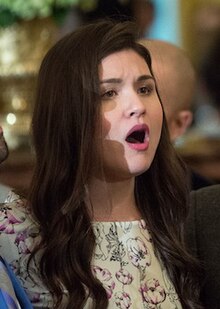 What did Phillipa Soo study at Juilliard?
Soo, known to friends as Pippa, had been acting since childhood in suburban Chicago. At 11 she had an agent and scored some work in commercials; she studied dance and improv and acted in high school productions, before landing a coveted spot at Juilliard, one of the nation's leading performing arts schools.Mar 8, 2017

'Amélie' and 'Great Comet' Have in Common? Phillipa Soo

pure lintrash — How does one pronounce Phillipa Soo?

Soo was born to a Chinese-American father and a European-American mother. In an interview with The Hollywood Reporter, Soo spoke about her upbringing: "In terms of my own experience, my dad is first-generation, so his parents were from China, and my mom was born and raised in southern Illinois, and she was involved in the arts. My dad's a doctor. I was very much always encouraged [to pursue an acting career], but the mentality of 'get your education' was still there."[1]

After graduating from Juilliard in 2012, Soo was cast as Natasha Rostova in the Ars Nova production of Dave Malloy's Natasha, Pierre & The Great Comet of 1812, based on Leo Tolstoy's War and Peace. The show went on to transfer from Ars Nova to another Off-Broadway space, Kazino, a tent custom-built for the show.

After seeing her performance in Great Comet, director Thomas Kail and composer Lin-Manuel Miranda asked her to take part in an early 2014 reading of the musical Hamilton, where she read as the leading female role, "Eliza" (Elizabeth Schuyler Hamilton). Soo remained with the show through its Off-Broadway and Broadway debuts. She received a 2016 Tony Award nomination for Best Performance by an Actress in a Leading Role in a Musical, along with Laura Benanti, Carmen Cusack, Jessie Mueller, and winner Cynthia Erivo.[7] Soo played her final performance in Hamilton on July 9, 2016, and the role of Eliza was taken over by Lexi Lawson.[8] 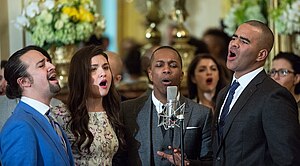 Soo appeared in the title role in the pre-Broadway engagement of Amélie at the Ahmanson Theatre in Los Angeles from December 2016 to January 2017. Amélie then began preview performances on Broadway at the Walter Kerr Theatre on March 9, 2017, opening officially on April 3.[9][10] The show closed on May 21, 2017.[11]

Soo also appeared on Broadway as Rebecca in The Parisian Woman, an original play by Beau Willimon. The production began preview performances at the Hudson Theatre on November 7, 2017, and opened on November 30 for a limited run through March 11, 2018.[12]

In 2013 she was cast in a small recurring role in the NBC television series Smash as the character Lexi. She appeared in five episodes in the second season before the show's cancellation.[13] She had a small supporting role as Nia in the 2014 television pilot Dangerous Liaisons, but it did not get picked up to series. In 2016, Soo voiced various characters in the Disney film Moana.

Steven Pasquale is an American actor of stage, film, and television. He is best known for his role as the New York City Firefighter/First Responder Sean Garrity in the series Rescue Me. He made his debut on the HBO series Six Feet Under, playing a love interest for David. Wikipedia
[ 打印 ]
[ 加入書簽 ]