HONG KONG — One of Hong Kong’s largest developers announced Wednesday that it had sold an apartment for 439 million Hong Kong dollars, setting a record, just hours after the city’s chief executive warned that the city might be facing a real estate bubble. 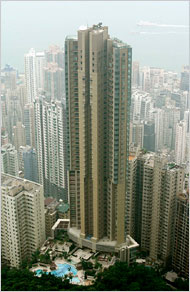 The developer of the "Conduit Road 39" building in Hong Kong announced that a 6,158-square-foot duplex apartment in the building has sold for $56.5 million.

The deal, valued at the equivalent of $56.6 million, set a record price per square foot for Hong Kong, and the developer, Henderson Land, said it was not aware of a higher figure’s having been paid anywhere else.

Henderson Land declined to disclose the buyer’s name but said it was a company registered in Hong Kong. The buyer’s representative spoke the local dialect with a strong mainland Chinese accent and appeared to be spending money earned on the mainland, a Henderson representative said.

As China’s economic recovery has gathered force this autumn, wealthy Chinese are pouring fortunes into Hong Kong real estate, producing a powerful surge in prices for luxury real estate. Hong Kong pegs its currency to the U.S. dollar and links its interest rates to American rates; with a flood of money pouring into local banks, adjustable-rate mortgages are available in Hong Kong for an initial rate as low as 2.05 percent, fueling real estate speculation.

Donald Tsang, the city’s chief executive, cautioned in his annual policy address Wednesday that the boom might not last.

“The relatively small number of residential units completed and the record prices attained in certain transactions this year have caused concern about the supply of flats, difficulty in purchasing a home and the possibility of a property bubble,” Mr. Tsang said.

International comparisons of apartment prices per square foot are difficult because different locales have different conventions on how to count terraces, common areas and other features.

Hong Kong in particular has had many controversies over whether developers have overstated the square footage of apartments and the value per square foot of often-complicated transactions.

Henderson Land said that the apartment on Hong Kong Island, near the top of a skyscraper overlooking Victoria Harbor, was a two-story unit with five bedroom suites. It measures 572 square meters, or 6,157 square feet, and has a garden of 340 square feet, for a price per square foot of 71,289 Hong Kong dollars, including the garden. That measurement includes common areas like elevator lobbies that are partially allocated to individual units.

Most real estate markets use a narrower definition of square footage, excluding such common areas. Henderson Land said the price per square foot of usable area, a more common international measure, was about 88,000 Hong Kong dollars, or $11,350.

The apartment building has its own ballroom, outdoor swimming pool, fitness center and outdoor yoga area. Another unit on the same floor just sold for 397 million Hong Kong dollars.

Last month, a local businessman bought a one-bedroom apartment of 816 square feet at a luxury development across the harbor in Kowloon for 24.5 million dollars.

Hong Kong’s real estate market is unusual because the local government owns virtually all of the land and leases it to developers for periods of as long as 99 years. Each lease contains strict zoning rules governing the square footage of the building that may be erected, how the building may be used and other uses; changes to the lease typically require lengthy negotiations with the government, as well as very large payments.

Hong Kong has more than 1,000 old industrial buildings left from its days as a manufacturing hub before almost all of the factories moved across the border to mainland China in the 1980s and 1990s to take advantage of low-cost labor.

Because of a strict requirement that they be used by manufacturing companies, many of the buildings are vacant or serve as warehouses for manufacturers across the border even though the buildings occupy prime locations.

Mr. Tsang said Wednesday that his government planned to start allowing the conversion or redevelopment of these buildings, which have a combined floor area of 87 Empire State Buildings, or 17 million square meters, into commercial real estate.

Property values are a subject of almost daily speculation in Hong Kong, where half of residents own their homes and most of the rest live in subsidized or government-owned housing. Mr. Tsang pointedly avoided any suggestion that the buildings would be turned into residential real estate.

His predecessor, Tung Chee-hwa, tried to address Hong Kong’s chronic housing shortage and high prices by increasing leases to developers so as to increase the supply of apartments. The effort got under way just as the Asian financial crisis hit in 1997 and 1998 and contributed to a 68 percent plunge in residential real estate prices from 1997 until a trough in the early summer of 2003, near the end of an outbreak of severe acute respiratory syndrome, or SARS.

Lau Siu Kai, the head of the central policy unit of the Hong Kong government, said at a news conference with foreign correspondents Wednesday that the government particularly wanted to use the nearly vacant industrial buildings to house companies from six industries that Hong Kong was trying to develop: education services, medical services, testing and certification, environmental industries, innovation and technology, and cultural and creative industries.

Some economists warn that if U.S. interest rates start to rise, real estate buyers in Hong Kong could be severely squeezed. Virtually all mortgages in Hong Kong are issued at floating rates pegged to banks’ prime rates, with no lock on the interest rate even in the first weeks of the mortgage.

Still, the record price set Wednesday is not likely to last long. The latest deal was for an apartment on the second-highest floor at 39 Conduit Road; the penthouse has yet to go on sale, with Henderson Land expecting to price it at 100,000 Hong Kong dollars per square foot, or $12,900.