There has been increasing talk recently about volatility becoming a popular new asset class, but one does not really invest in volatility: It has a zero or even negative long-term expectation, at least from an average starting point. Trading in shorter time frames, however, can make a great deal of sense.

That said, the definition of "short term" can run from seconds to weeks, which is why many of the new volatility funds are dynamic. Many insist that volatility funds should not be bought at all, while others say that any positions should be held only a matter of days at most.

The debate over "tail risk" funds and other hedging vehicles that we have cited in recent weeks is as lively as ever, and some prominent voices have said that buying into any such products is a losing long-term proposition. The CBOE PutWrite Index , when used as a benchmark, shows that selling those protective puts has outperformed the S&P 500 over the long term with less volatility.

So if volatility trading is something that we should do only in the short term, the question is when. This brings up the issue of timing, something that most people will tell you is impossible over the long term. But in a market that hasn't gone anywhere in 10 years, isn't it worth trying to find a timing system that works? 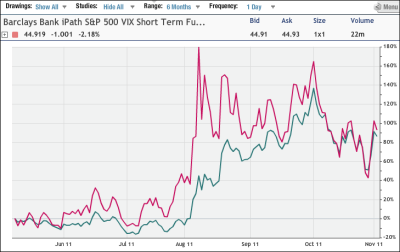 What explains this difference? Well, it is important to remember that the VXX is composed of the two nearest-month VIX futures, with a daily roll from contracts in the front to the second month. The VIX futures are projections of where the VIX will be at expiration, so they will react differently to changes in volatility.

This backwardation is positive for that daily roll and adds to the performance of the fund. And looking at the chart, the difference between contango and backwardation has vast significance for the VXX.

The upshot: "Investing" in the VXX for the last three months would not have been such a bad idea.

This discussion ties into an interesting conversation that I had recently about strategies for different volatility regimes, as I believe firmly that it makes sense to have various game plans to address fluctuating volatility levels. Many traders get stuck on type of strategy and try to apply it to all market conditions, which is clearly not the best way to approach the markets.

Keeping written rules about what strategies you are going to use under different scenarios will improve your trading. It also goes back to that timing question.

An easy timing strategy for the VXX is to buy it when the VIX futures are in backwardation. Those looking to time their hedges could employ the same criteria or at least use it as a model for what type of strategies make the most sense.

(A version of this article appeared in optionMONSTER's What's the Trade? newsletter of Nov. 2. Chart courtesy of tradeMONSTER.)