Prime Minister Tony Blair leaves Raffles City Convention Centre in Singapore July 3, 2005. Blair is in Singapore to support London's bid to host the 2012 Olympic Games, ahead of the International Olympic Committee's (IOC) announcement of the successful candidate city on Wednesday. 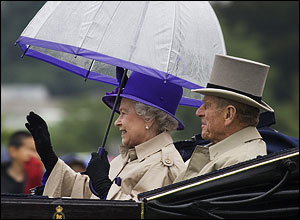 US President George W Bush has snubbed producers of animated TV hit The Simpsons, by refusing to appear in an episode of the show.

U.S. President George W. Bush leaves Air Force One in the rain after arriving at Pope Air Force Base in North Carolina, June 28, 2005. Bush is scheduled to address the nation in a prime-time television speech from the U.S. Army's Fort Bragg on Tuesday evening about U.S. military involvement in Iraq.

U.S. President George W. Bush waves as he leaves the White House on his way to the Marine One helicopter on the South Lawn in Washington, June 28, 2005 on his way to North Carolina. President Bush will try to shore up wavering support for the Iraq war on the first anniversary of Iraq's sovereignty, with an address to the nation on Tuesday night from the military base at Fort Bragg, North Carolina, telling Americans it is essential to keep fighting to stabilize Iraq despite the prospect of more bloodshed.

U.S. President George W. Bush talks about the upcoming G8 Summit in Scotland while at the Freer Gallery in Washington, DC June 30, 2005. Britain called last-ditch talks on Thursday to hammer out an agreed agenda for next week's summit and welcomed Washington's announcement that it would double aid to Africa over the next decade.

Nelson Mandela and his wife Craca Machel wave to the crowd at the 'Africa Standing Tall against Poverty' concert in Johannesburg July 2, 2005.
[ 打印 ]
[ 加入書簽 ]